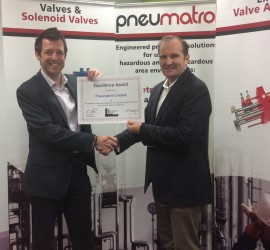 Pneumatrol Limited, the Lancashire-based specialist manufacturer of pneumatic control products for use within both hazardous and safe area environments, was awarded Member of the Year 2014 by the Manufacturers Alliance in North West.

Manufacturers Alliance is a network of leaders and managers in the manufacturing industry sharing their knowledge and experience on how to grow and sustain a high performing business.

Pneumatrol was recognised for achieving the most significant progress towards Operational Excellence during 2014.

While presenting Jamie Dummer with the certificate of Excellence Award (in picture), Gary Sheader, Group Chairman of Manufacturers Alliance commented, “Pneumatrol has achieved enormous improvements over the year of 2014 – from significant work place improvements in many areas of the factory, through improved operation processes for planning and controlling their work, to presenting themselves to customers in a much more professional way”.

Jamie Dummer, Managing Director of Pneumatrol added, “We are proud of ourselves for what we have achieved in 2014. However we won’t be complacent and in 2015 we will continue the process of undertaking the next changes and improvements to take the business forward.”